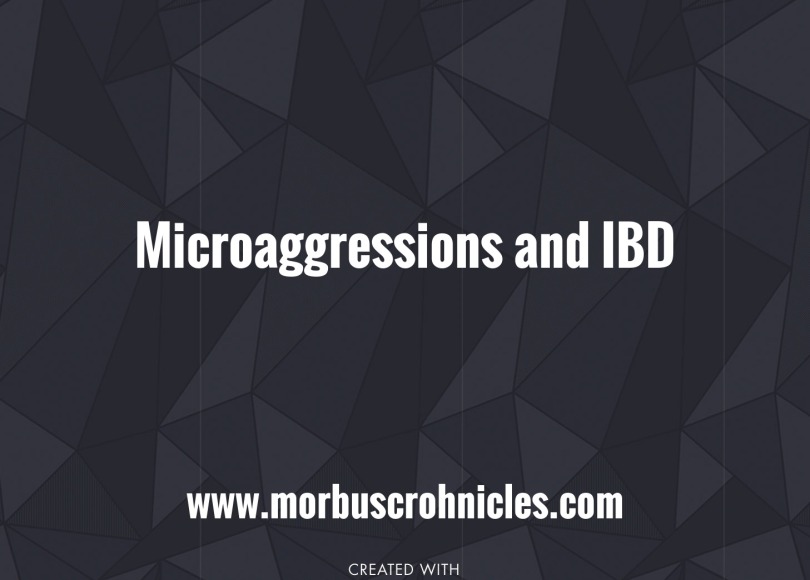 “So and so has had kidney problems, you just have a dicky tummy”

“You can’t feel that bad, if you are still wearing make-up”

“But, you are so young! Isn’t RA only for grannies?”

“You got a PhD and you have Crohn’s?”

“But you look so good”

If you suffer from IBD, these utterances probably sound familiar in one way or another. I will go ahead and call them microaggressions.

The term “microaggression” was coined in the early seventies by psychologist Chester M. Pierce, and recently further developed by Derald Wing Sue. They define microaggression as “brief and commonplace daily verbal, behavioral, or environmental indignities, whether intentional or unintentional, that communicate hostile, derogatory, or negative racial slights and insults toward people of color.” This classic definition has been expounded upon to include gender, class, sexual orientation. Unfortunately, the discussion on microaggressions is mostly confined to academic circles, and teacher education and hasn’t really reached the wider public. Also, in my humble opinion, the definition is incomplete, and needs to include invisible illnesses.

Now, we can just ask, “seriously, do we need yet another term to basically describe rudeness?”  In short: Yes.

Microaggressions all have in common that they come from a place of privilege, in this case health, and our assumption that health is “normal” (this is sometimes called “ableist language”- I don’t like this term, because it implies that I am unable in some form, and I reject that). Telling me I can’t be sick because I am wearing make-up implies that if I am sick, I better look the part, and make-up is for healthy people. (Any mom in this world who has put concealer over their dark circles will be able to dispel this myth.)

But what do you do? Snappy retorts work only in a few cases, because sometimes microaggressions are meant as compliments, such as “but you look so good.” Also, except for a few stellar hours, I am usually tongue-tied. 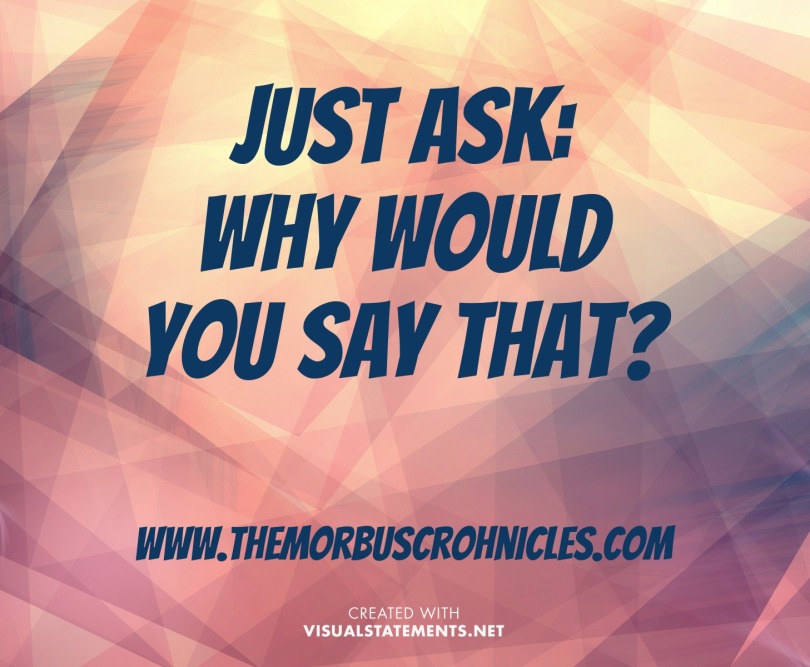 In my experience,  being the “bigger person” is a good first step. Yes, it’s frustrating that you as the recipient of a microaggression should be the bigger person, but what good would it do otherwise? You’d end up with a whole lot of anger, frustration and negative feelings, and the other person would continue.

Often, a simple “why would you say that?” stops the person in their tracks. The first of my examples, “Crohn’s? That’s ok to have, it’s treatable,” was actually uttered by one of the nurses administering my Remicade infusion. I couldn’t believe it.  So I asked her, “why would you say that?” Now it was her turn to be confused. She had meant to be encouraging, and her husband had Crohn’s, too! I asked her, whether his intestines had spontaneously ruptured, too? It ended up being a fruitful conversation, in which I explained that no patient was alike. And that while I have a great family life and I am successful at my job, this wasn’t always the case.

Shield yourself. No one, myself included, likes being called out on something. Most people will attack you. You will be told that you’re overly sensitive, that you blow things out of proportion etc. Your feelings are your feelings and they are never wrong, they are just there.

Don’t give up. Anna Giraldo Kerr has written about microaggressions in the workplace, and her words resonate with me:

“The art of handling microaggressions effectively develops over time. It is like building a muscle. You need to exercise it, feed it the right nutrients, let it rest, and then challenge it again. And again. And again.”