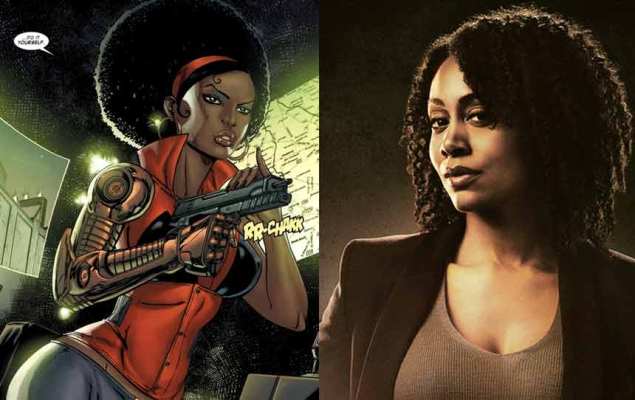 A black, unapologetically feminine cop with a strong sense of right and wrong, Misty keeps everyone in Harlem in check. She subverts the tired “oh, she’s running with the boys” stereotype; the boys were running with her. Even when she is betrayed by her partner (which I saw coming the moment I saw the sleazebag), Misty comes back, swinging. Until she lost her arm when she saved Colleen (katana-wielding girlfriend of Danny Rand).

I am generally happy with Netflix’s handling of the superhero genre (with a few exceptions), but to me they did fail Misty Knight’s character. Some of it can be chalked up to bad writing.

The first few episodes of Luke Cage Season 2 deals with Misty recovering from the loss of her arm, and more so, the reactions to it. She returns to the precinct one-armed, only to find out that her desk was given to a colleague and she is being put on “light duty”- whatever that means (Episode 2). Later they even call her “the Department’s Private Ryan- they can’t let anything happen to you” (Episode 3). While this is all pretty infuriating, it is an accurate depiction of how society deals with our “heroes.” Instead of thinking about how smart, experienced and useful she could be, they see one thing, and they see what’s not there anymore.

Similarly infuriating, however, was her friends doing the opposite, pretending that everything was just fine.  Colleen’s “shit or get off the pot” speech in particular was unbelievable. While they are sparring (and Misty is displaying enviable upper body and arm strength in her left arm), Colleen tells her that “you’ve lost your arm, not yourself.” Can you be any more condescending, Colleen? After that, she goes into a lecture about how our bodies are just channels for our energy, our chi. Hello, Cartesian mind-body divide, I missed you! (NOT!). You should give speeches to veterans, I am sure they’d love to hear from you, Colleen.

They go drinking together at a bar and end up in a bar fight (like you do). Now that Misty has physical proof she’s still a badass, she finally agrees to an arm prosthesis designed by the Iron Fist, Danny Rand, or someone in the corporation.

We don’t need to go into how unrealistic this all is. At no point do we see Misty Knight struggling with PTSD, or as much as taking a pain killer. She somehow never experiences phantom pain, except for the boxing scene, where she mentions her peripheral vision is gone (which somehow doesn’t keep her from driving a car, alone, on multiple occasions).

Granted, she is a supporting character, the show is not called Misty Knight. Also, she’s supposed to be a strong character (I am pretty sure Netflix is setting her and Colleen up to be the Daughters of the Dragon), so I guess the producers’ and writers’ did not want to show what they perceive as “weakness” (which is a whole can of worms that I can’t get into right now).

Misty Knight gets her bionic arm, which, of course fits like a glove (unlike most prostheses), but OK. By the time Iron Fist Season 2 rolls around, Misty is back in business, wielding her bionic arm like a weapon. At one point, she meets Ward Meachum, the sleazy guy who actually does the work of running Rand Enterprises, and he tells her that her arm was as expensive as “a Ferrari,” suggesting not-so-subtly that she is morally indebted to them. And a grateful Misty Knight of course goes on to protect Danny and Colleen and Ward and his nasty sister.

And that’s when it hit me. When exactly did multi-billion Dollar corporations become the good guys? How exactly does Rand Corporation make their money? We know they blinded Matt Murdock, so is “fixing” Misty Knight their atonement?

Superhero comic books used to be a form of resistance. Literary scholar Ramzi Fawaz writes: “The X-Men developed the popular fantasy of the mutant superhero not only to resist a variety of repressive social norms – including racial segregation, sexism and xenophobia- but also to facilitate the ground from which new kinds of choices about political affiliation could be pursued.” Earlier than most cultural mediums (with the exception of Star Trek, maybe), Marvel realized that representation matters! They had female superheroes (we can talk about the way they were drawn, sure, but they did exist). They incorporated superheroes of color- yes, Ororo Munroe’s origin story may be problematic from a post-colonial point of view, but she is also one of the first immigrant superheroes. The leader of the X-Men, Charles Xavier, Professor X, is in a wheelchair- and while he is an annoyingly blasé, sometimes patronizing white man, he is trying to use his privilege for good, dedicating his life to helping young mutants. Moreover, the comic books showed the struggle and ambiguity inherent in being different. Iron Man (who in the comic book engineers Misty’s new arm) is a raging alcoholic. Emma Frost has changing allegiances, and Mystique has so many issues that she could keep a team of therapists busy. Even super-villain Magneto is tortured by memories of the family the Nazis took from him.

When I think of comic books and the recent (OK, the last ten years) explosion of film adaptations, I keep coming back to Karl Marx’s concept of the “camera obscura”- the idea that a society’s ideology is the inverse of what society actually is. I am using the word ideology loosely here, in the sense of “ideal” or even “projection” (forgive me hardcore Marxist literary critics. Actually, I don’t care what you think). Comic books served as the projection space for kids (and grown-ups) of color in a white dominated world. They allowed kids in hospitals to dream that their affliction someday would turn into an “ability”, or who knew exactly how Wolverine felt, having been prodded by doctors ad nauseum), and to many, as Ramzi Fawaz’s quote shows, there was a futurity in the comic books, a hope, maybe even a promise that things could be better.

I am sorry, Netflix, but I don’t see much of that left in your adaptations, especially in Misty Knight’s character. In a time of Black Lives Matter, Misty is the good cop, and even though her department is a parade of either bumbling idiots or traitors, she continues to advocate for the NYPD, portraying them as the good guys (although, that may change. I dearly hope so). Similarly, at a time when millions of Americans fear losing the little healthcare available, when Medicare and Social Security are called entitlements, Netflix is suggesting that big old corporations can help (hello, Amazon Healthcare). Yes, they may occasionally blind people and empower a crime conglomerate for years, but they are giving poor little Misty “a Ferrari.” Instead of punching Ward’s brains out to show him “Ferrari”, Misty just shakes her head- as a black woman with a disability, she’s probably heard worse.

Netflix completely stripped the character Misty of any possibility of meaningful societal change, and instead is advocating for the status quo. Here’s your bone, disability community, we’re giving you Misty Knight, rescued by a white privileged boy with too much money on his hands. And that’s what makes me uneasy with her character. Not only representation matters; it also matters how things are represented. I don’t want to see another character with a disability getting handouts and having to be grateful for it. I want to see characters with disabilities who are considered valued members of their community, who receive the best medical care because they deserve it (as humans, mutants, or “people with abilities”).

But, an idealist with hopes for the future, just like Misty, I have hopes that whatever Netflix is giving me next may be better.

Sources: Ramzi Fawaz: “where No X-Man has Gone Before! Mutant Superheroes and the Cultural Politics of Popular Fantasy in Postwar America. American Literature, 83, 2, 2011, 355-388.

A note on language use: I try to use person-first language. I haven’t always and probably slip on occasion, but I vow to do better.

Thanks to Brandon, who blogs over at “The Red Thread” for proofreading and suggestions!