This saturday, March 24, I went to the March for our lives. I had been back and forth about going, because quite honestly, I don’t like crowds, I was worried about violence, I worried about restrooms… Then, I pushed myself, and I am glad I went. I can assure you that standing outside in Portland in March is fun, but I was in great company- my neighbor and her sweet, sweet daughter came too.  Also, it was the first time in a long while that I didn’t feel so sad and hopeless about gun violence. It’s one thing to read about the 70% of Americans that support a ban on assault rifles, it’s another matter to see it. To see and to be inspired by all the smart and yet painful signs. 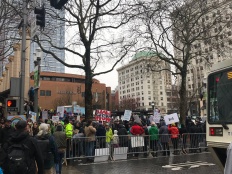 Previously, I had only gone to the women’s march, and had made a few mistakes- so this time, I learned from them.

BEFORE I START, LET ME RE-ITERATE WHAT I SAID IN AN EARLIER POST:

Protesting does not just mean going to demonstrations. Always put your health first, no matter how much you want to smash the patriarchy, and show your dissent etc. There are other ways to make your voices heard. The women’s march for example had an online platform, and so did the March for our Lives, and the March for Science as well. You can tweet and text from home. This is all stuff for another post though!

A few precautions that I took:

I looked at the March route and marked public bathrooms and bathrooms in stores that I could potentially use on my phone. Since it was downtown Portland, I knew most of them already. My favorites: Powell’s, Nordstrom, Anthropologie.

I walked with my neighbor and her daughter in a stroller. Aside from the fact that they have a slow pace, people always are respectful and helpful if you need to get out of a crowd.

I left when I had enough- in this day and age, most speeches will be either live streamed or on youtube later. Your health and energy always comes first. You’re of no use to anyone if you’re sick and exhausted for two days after the event (lessons learned from the 2017 women’s march).